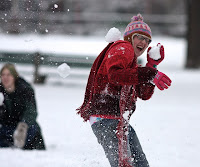 A group of college students in Wisconsin failed in their attempt to have the worlds largest snowball fight.

Freshman organizer Mike Basak had hoped the epic snowball fight would break a 2006 record set by 3,700 students at Michigan Technological University, but acknowledged Saturday that the turnout at his school was disappointing.

Basak guessed that 2,000 or more students showed up, but other observers put the total at hundreds of students, not thousands.

"It was definitely huge and it was a great event," he said.

In advance of the fight, more than 4,000 people had joined the event's Facebook group, and word continued to spread as rival dormitories got ready to rumble in the center of campus.

School officials also prepared, recruiting a student group of volunteer emergency medical technicians to be on the scene.

Basak said no one was hurt in the melee, although "there were a few bumps and scrapes."

It is thought that the chilly temperatures and a basketball game caused the numbers to be reduced. The organizer said that he will try again next year.

Perhaps he should offer free hot chocolate to the participants.
Posted by Sara at 8:49 PM

Hahaha! I HEARD OF THIS ON THE NEWS AND I WISH I HAD THE GUTS TO DO SUCH A THING!