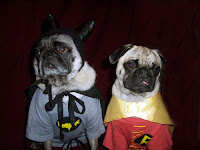 Cops in California are sending a message to all real life super heros. Stick to reporting crime, we will fight it.

"Anyone who goes out and tries to assist law enforcement by handing out fliers and being proactive against the criminals is appreciated," spokesman Bernard Gonzales said. "But when you start physically involving yourself in crime fighting, that's vigilantism."

But Mr. Xtreme, whose identity is a secret, said he and his fellow crime-fighting members of an online superhero community are well within their legal rights.

So, what do you think? Are these superheros supercool or superstupid?