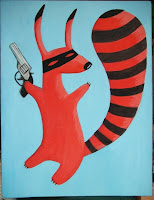 A bank robber in Ohio was caught after he got stuck between the double doors while trying to leave with his loot.

However, bank employees activated a security system as the man attempted to leave the bank and he became trapped in between the interior and exterior doors of the bank, witnesses said. He attempted to break through the exterior door but was interrupted by the arrival of a Dayton police officer, who took the man into custody.