Man returns lobster -- after he ate it 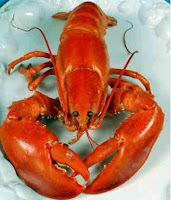 A man in New York stole a bag of crab legs after trying to return an empty lobster shell to a grocery store.

Montgomery County sheriff's deputies said Walter Tessier told employees at the Price Chopper store in Amsterdam that he wanted to return a $10.99 lobster because "it was bad," the Albany (N.Y.) Times Union reported Wednesday.

However, Tessier allegedly ran from the store with the bag of crab legs he was planning to exchange the lobster for after workers discovered the lobster was only a reassembled shell, deputies said.

They said Tessier was arrested at his home but he allegedly had already eaten the pilfered crab legs. He was charged with petit larceny and given a court appearance ticket.

Think he would have stolen shrimp or clams next?

Good luck with the Challenge!

*Giggle* What is this world coming to?
*BIBI*