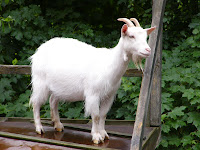 Police in Nigeria are holding a goat that is being accused of using witchcraft to steal a car.

A police spokesman in Kwara State has been quoted as saying that the "armed robbery suspect" would remain in custody until investigations were over.

But another police spokesman told the BBC the goat was being held in case its owner claimed it.

The belief in witchcraft and the power to change shapes is common in Nigeria.

Police reform activists have condemned the "arrest", saying it highlights the low education levels of many Nigerian police officers.

Nigeria's Vanguard newspaper has a picture of the goat and reports that police paraded it in front of journalists in the Kwara state capital Ilorin on Thursday.

But this was denied by national police spokesman Emmanuel Ojukwu.

"The vigilante group arrested the goat and took it to the police, then they told the media."

The next morning journalists turned up demanding to see the goat, he said.

Really, a goat? Stealing a car?