He should have flown south 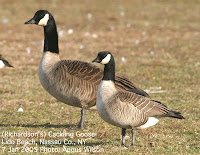 Earlier this winter I expressed worry for the geese that did not fly south and what would happen to them when it got cold. Well, a goose here in the Detroit suburbs had to be rescued after it froze in a river.

Sgt. Dan Willis, of the Macomb County Sheriff’s Office, said someone reported seeing the goose in the river in the park, which is located in the Clinton River Drive and Gratiot area in the southern end of the city

When divers and a marine officer arrived, they first tried to put warm water around the goose which was trapped in the ice. As rescuers worked to free it, the goose let out loud quacks as if to say “get away” but then quieted down, Willis said. Within a hour of the 7:30 p.m. run, divers were able to chip away the ice and the goose was free, Willis said.

The goose then waddled over to a group of geese sitting in open water nearby.

“It let out a couple of good quacks and it was on its way,” Willis said. “It swam away with the rest of the pack.”

Poor thing. I'm glad that it's ok. Next year he should fly south where he can't get stuck in a frozen river.