Mr. Policeman, Mommy is under the bed 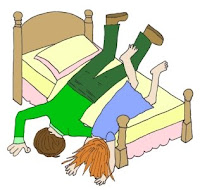 When police entered a house in Florida looking for a woman with outstanding warrants they were told she was not home by the adults in the household. However, the woman's daughter informed the police that her Mommy was under the bed.

Officers said two men and a woman at the house told officers that the woman had left, but then a 4-year old child approached one of the officers and revealed that the woman was under a bed.

Officers found the woman exactly where the child said she would be.