Man breaks out of jail, robs store then breaks back into jail 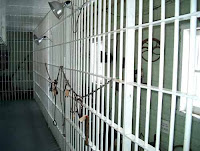 A man in Florida is accused of breaking out of jail, robbing a local store and then trying to break back into jail.

Harry Jackson, 25, of St. Marys, Fla., was arrested Saturday entering the jail with 14 packs of cigarettes allegedly stolen from Snappy Foods about a block away, said Sheriff Tommy Gregory.

Jackson allegedly escaped by using wire from a broom to unlock an electronic door in the jail, Gregory said, adding Jackson has been charged with escape and burglary.

He at least could have stolen some beer.