The Dog was not stolen, he was hiding 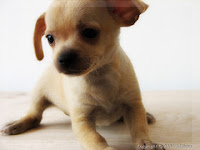 A dog that was reported stolen in Michigan has been found, hiding in his owners house.

The owner of Zeus, the $2500 Chihuahua, told Troy Police today the dog was found later Saturday, hiding in his home on Wolverine after a break-in overnight, Troy Lt. Chuck Pappas said.

The owner originally reported Zeus stolen, along with a laptop computer and a shotgun.

I don't think Zeus is a very good watchdog. Sounds more like a scardykat.
Posted by Sara at 10:48 PM