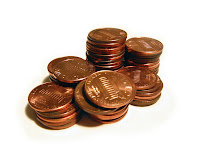 A Virginia man who was upset over his high electric bill showed up to pay his bill with over 29,000 pennies.

John Almany of Bristol said he and his brother, Gary, concocted the plan of using pennies to pay the large bill in January and contacted several banks to raise the right amount of change, the Bristol (Va.) Herald-Courier reported Monday.

"I called some nearby banks to see if I could exchange cash for pennies," Almany said. "We got all the way to the Ws in the phone book. One bank gave me $170 in pennies and the other $123."

Almany said he and his brother loaded the loose pennies into two duffel bags, which together weighed 170 pounds, and brought them to the Bristol Virginia Utilities office.

"We pulled into BVU about 2 (p.m.) and took the bags of unrolled pennies to the pay counter," Almany said. "To make my case better, I noticed a man just paid cash right before me. I laid my bill on the counter and told the lady, 'Here is my bill and I'm here to pay every penny of it."'

Because that's the way to make your electric company have lower costs, tie up their employees counting your bill. That's not cute or funny, that's just stupid.