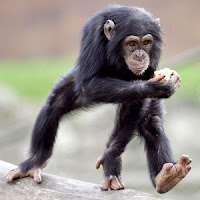 A crazy chimp in Sweden has impressed researches with his planning ability by stockpiling rocks to throw at zoo visitors.

According to a report in the journal Current Biology, the 31-year-old alpha male started building his weapons cache in the morning before the zoo opened, collecting rocks and knocking out disks from concrete boulders inside his enclosure. He waited until around midday before he unleashed a "hailstorm" of rocks against visitors, the study said.

"These observations convincingly show that our fellow apes do consider the future in a very complex way," said the author of the report, Lund University Ph.D. student Mathias Osvath. "It implies that they have a highly developed consciousness, including lifelike mental simulations of potential events."

They will one day take over the world! (You'd know that if you've ever seen Planet of the Apes).