Boy finds drug money, gives it away at school 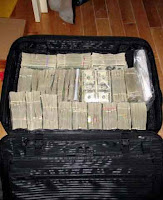 A Minnesota boy who found thousands of dollars on the side of the road gave it away to his friends and teachers.

When asked how he got the $100 bills, the student first said it was his allowance. He later said he found it in a ditch — and led police to a spot by a highway where they also found marijuana and scales.

The boy, described as learning disabled, gave away about $11,000 of the nearly $18,000 in the bag. Law officers collected the money from students and from the school bus aide, who had reported that someone slipped $1,200 into her bag.

I hope no one comes after the kid. How sweet is he. The police are not planning on charging him with anything.