Craft store pulls quilt magzine because it's too racy 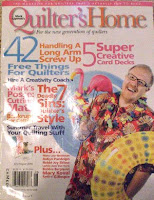 A craft store has pulled an issue of Quilters Home magazine because it features nudity.

The Hudson, Ohio, based chain declined to comment on removing the January/February issue of the magazine from shelves but said the stores will continue to carry future issues, the Chicago Tribune reported Wednesday.

New Jersey-based quilting aficionado Mark Lipinski, who put together the controversial Quilter's Home issue, said the images in the magazine, including nude pictures, a quilt of a gun-toting Jesus and a Viagra-themed quilt, are meant to challenge the idea that all quilters are conservative older women.

"All the other quilting magazines you see are tea parties, and we're more like a cocktail party," Lipinski said. "Everyone loves a cocktail party."
A Viagra themed quilt? Now that's funny.
Posted by Sara at 7:52 PM