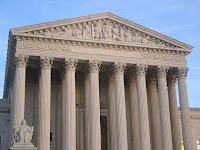 And Ohio man stole a car so that he could report to court to be arraigned for theft.

Assistant Hamilton County Prosecutor Betsy Sundermann said John Spinnie, 42, allegedly stole a Chevrolet Uplander so he could drive to his 9 a.m. Tuesday arraignment at the Hamilton County Justice Center on charges of stealing $1,800 worth of jewelry, the Cincinnati Enquirer reported Wednesday.

Sundermann said Spinnie was pulled over by a Cincinnati police officer before he reached the courthouse and was arrested on a charge of receiving stolen property. The suspect claimed an unknown man had allowed him to use the car for a $10 fee.
Yeah, we believe you, it was a one armed man wasn't it.
Posted by Sara at 7:47 PM

Haha! What does he think that the police are stupid?
One of the best dumb criminals stories ever!