Man arrested for trying to get a hug from a cop 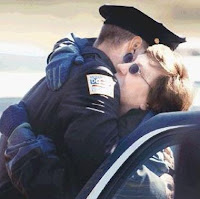 A man in Michigan was arrested after he cursed at a police officer who refused to give him a hug.

Police were called because of reports that a man was yelling and carrying on in the street, when officers approached them he agreed to return to his home.

But he then approached a patrol car and yelled at an officer, asking for a hug and swearing at him when the officer refused, while still blocking traffic.

The man was arrested and detained. He refused a Breathalyzer test and may face disorderly conduct charges.

Aw, he just wanted a hug.

What a twist, I thought he would just go home and forget about it. I think it's the swearing that got him into trouble, still, poor guy. Maybe the officer wasn't in a mood for hugging too. ^^