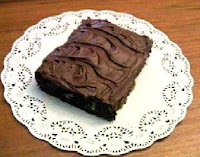 A Mother in California will have to attend parenting classes after she fed her daughter a brownie laced with pot.

The single mother claimed the brownie belonged to her roommates, who had baked the batch for medical purposes. She said she didn't realize the brownie contained pot.

Staff members at the girl's school said she reported feeling sick and was taken to a hospital, where traces of marijuana were detected in her system.