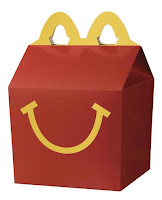 A British boy recently made a killing when he sold his happy meal collection.

Luke, who is from South Clifton, Nottinghamshire, 140 miles (220 kilometers) north of London, said Thursday it was tough to put the collection under the hammer.

"It was sad to see it go," he said on a telephone interview on his way home from school. "We just needed the room. It was on the landing. It was everywhere."

Unique Auctions' owner Terry Woodcock said he had no idea the memorabilia would sell.

"I didn't think people would be interested in McDonald's toys. I've never been so wrong about an auction in 20 years," he said.

Woodcock said that people from around the world — including the U.S., Germany and Australia — bought pieces of the collection. One man paid 300 pounds ($420) for a 101 Dalmatians toy to finish his own collection.

Wow, that's a lot of money for badly made plastic toys.

Good for him. Hopefully he will save some of that money. If he keeps saving and selling, he could have a pretty good nest egg by the time he's an adult. :)