Woman calls 911 because there are no McNuggets 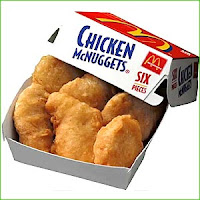 A woman in Florida was cited after calling 911 three times after being told by her local McDonalds that there were no more nuggets.

A police report said 27-year-old Fort Pierce resident Latreasa L. Goodman told authorities she paid for a 10-piece last week but was later informed the restaurant had run out.

She says she was refused a refund and told all sales were final. A cashier told police she offered Goodman a larger portion of different food for the same price, but Goodman became irate.

Police say Goodman was cited on a misuse of 911 charge. A current phone listing for Goodman couldn't be found.

I understand that the situation was upsetting. But it's not an emergency. Perhaps she should be required to take a class on emergencies vs non-emergencies. Emergency = Robber in your house. Non-Emergency = there is no strawberry yogurt at WalMart.