Passenger claims to be air marshal to catch plane 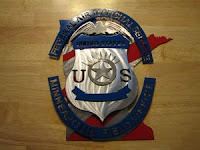 A man that was late for his flight in Miami used a fake air marshal badge to try to get his flight.

Miami-Dade police said a 49-year-old man was booked on a flight to Los Angeles Wednesday night, but the gate had already closed and the plane was departing.

After he showed the fake badge and claimed to be an air marshal, employees stopped the plane and let him board.

But real air marshals already on the plane recognized his fake badge and kicked him off.

Not content with avoiding arrest, police said the man went to an airport bar and began loudly complaining about missing his flight. That's when airport police arrested him.

He was arrested for impersonating an officer. I think he should also be charged with being an idiot.