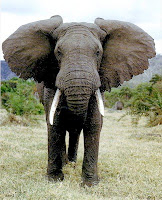 Politicians in parts of rural India are facing demands for solutions to controlling elephant stampedes.

At rallies in Ranchi, the capital of the impoverished eastern state, candidates who promised to build new schools and roads have been heckled by farmers. They demanded: "What good is all that when we're not safe in our homes because of the elephants?"

ndia's growing population has meant settlers pushing into the dense jungles that used to be home to a large and untroubled elephant population.

Under pressure from humans, the beasts have in turn been forced into villages and fields to forage for food.

Confused, disorientated and hungry, they stumble into inhabited areas where their foraging expeditions often end in eye-to-eye confrontations with petrified villagers.

In January, a herd of nearly 150 hungry elephants rampaged through a village in the remote north-east, trampling to death a young family as they slept in their hut.

Farmers tired of watching elephants feasting on their crops and destroying their rickety huts have poisoned or electrocuted them. Others have shot them with poison-tipped arrows. Less lethally, some farmers have also enlisted the services of camels whose scent is apparently so unpleasant that it will drive even the laziest elephant away.

As voters look ahead to the first phase of polling on April 16, the streets of Ranchi, the capital of Jharkand, are linked with posters promising: "Save us from elephants and get our vote".

Saurabh Narayan Singh, a candidate for the Congress Party in Ranchi, said there were no easy solutions to a conflict in which both sides were justified in demanding space to live.

"I can only promise that if I'm elected, I'll train villagers to scare elephants away by bursting firecrackers or beating drums, as they do in Africa, or lighting torches and smearing fences with red chilli paste," said Mr Singh.

His rival, Subodh Kant Sahai, a candidate for the Bharatiya Janata party, said he would appoint more guards to police the area. "Well-equipped forest guards can manage the herds and keep them away from human habitations," he said.

Wow, and I thought politics were complicated here with the economy and health care. Those things are nothing compared to the horrors of elephants!!! Elephant Attack!!!