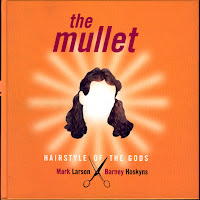 A Florida boy has been growing a huge mullet so he can donate his hair to cancer.

Dustin grew his hair into a mullet-style, shorter in the front and longer in the back, just like his dad, Barry Amara. His father also plans to donate his hair once it's longer.

"He's had some teasing from the other kids because he had his hair long," Barry Amara, of Sunrise, said. "They'll tease anyone who looks different. But once he explained why, they really admired him."

Before growing it out, Dustin had his hair in a short buzz cut.

"We always have to remind him to brush his hair," his mother, Tracy Amara, said. "He thinks if he just fixes up the front, no one will notice, but it doesn't work like that."

As the hairstylist tied Dustin's hair into a ponytail and pulled out the scissors, Dustin grimaced. Even though the style was just for charity, he said it would be strange to feel air on the back of his neck again.

The mullet: business in the front and a party in the back.
Posted by Sara at 7:09 PM