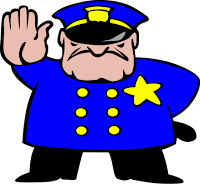 A man in Pennsylvania wasn't being very smart when he pulled a gun on a retired police chief who was attending a police convention.

John Comparetto says as he came out of a stall in the men's bathroom, a man pointed a gun in his face and demanded money.

Comparetto, a retired police chief from New York, gave up his money and cell phone. But when the man fled, Comparetto and some colleagues chased him. They arrested 19-year-old Jerome Marquis Blanchett of Harrisburg as he was trying to leave in a taxi.

Blanchett, who was awaiting trial of four previous robbery charges, was arraigned Friday before a District Court judge who set bail at $1 million.

When a reporter asked Blanchett for comment as he was led out of court, he said, "I'm smooth."

Doesn't seem that smooth to me. Seems very stupid to me. Perhaps he learn to be a smarter criminal when he spends time in jail for his crimes.