Third grader brings grenade to school for show and tell 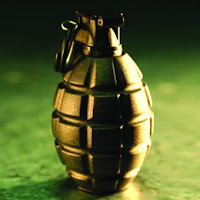 A third grade student caused quite a scare in his elementary classroom when he brought a grenade to school.

The grenade brought in by a third grader turned out to be a simple paperweight, although Columbus police had to be called to make certain.

"It wasn't anything secretive; the student didn't try to sneak it in," said district spokesman Lee Cole. "It's a teachable moment to make sure parents know what their kids are bringing to school."

The Columbus (Ohio) Dispatch said Thursday the student brought the paperweight in because his class was studying World War II, and won't be punished for the uproar.

I guess it's too much for us to say that parents should know what their kids are doing.