A Bobcat Walked into a Bar 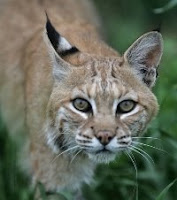 A bobcat walked into a bar in Arizona and started attacking the customers!

Officers called to the Chapparal Bar in Cottonwood arrived to find the bobcat in the parking lot, where they shot and killed it, KVRD-FM radio reported.

Tests were ordered to determine if the animal was rabid. It wasn't clear how seriously the victims had been injured.

Cottonwood police say the animal attacked Monday when it scratched a woman who thought she had hit it with her car. Then police got a report of a bobcat acting aggressively toward a woman outside a Pizza Hut.

Later came the call from the bar that a bobcat was inside as patrons climbed atop bar stools to get away.

That's an entertaining visual. Drunk bar coustomers climbing on their chairs to get away from the crazy bobcat. He was probably just looking for a drink and some snacks.