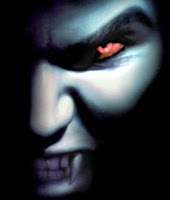 A thirteen year old in Iowa was disciplined for biting eleven of his classmates.

According to the report, the boy bit a 13-year-old female student on the right hand at a track meet on March 13. McCombs Vice Principal Connie Sloan investigated the incident and found that the boy had bitten 10 other students.

When police contacted the boy's father, he said that his son didn't mean to hurt anyone and that he was biting other students because of the movie "Twilight."

The film "Twilight" is based on a series of novels by Stephenie Meyer about a teenage girl's love affair with a vampire. The film, popular with tweens and teens, has grossed more than $191 million in box office receipts in the United States since its November release.

I think what the boy missed about the book is that the vampires don't actually bite people.
Posted by Sara at 10:55 PM