Man attacks fiance because she made a bad sandwich 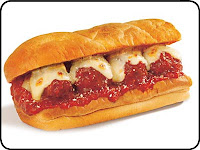 A Pennsylvania man attacked his fiance with a kitchen knife and his teeth because he didn't like the meatball sandwich she made him.

Just ask Lyndel Toppin's fiancée, whose middle finger was almost chopped off when Toppin allegedly attacked her with a kitchen knife, according to Upper Darby police.

The reason for the assault, cops say, was a poorly made meatball sandwich. Specifically, the cheese placement was all wrong, which infuriated Toppin. "That was the catalyst," police Superintendent Michael Chitwood said.

The 44-year-old woman, whom cops did not identify, was preparing dinner last week in her Kingston Road home when Toppin "became enraged due to the victim not placing cheese on his hoagie roll correctly," according to the arrest affidavit.

Toppin grabbed a knife from the other room and slashed her finger, causing a deep laceration, she told police at Delaware County Memorial Hospital, where she received 23 stitches to close the gash.

Also, instead of chomping on the meatball sub that she'd made him, Toppin wrapped his teeth around his girlfriend's left wrist and refused to let go, the criminal complaint says.

"Toppin bit down on the victim's arm and would not release his bite," Upper Darby Investigator Matthew Rowles wrote in his report. The bite left swelling and teeth marks.

"It was a barbaric attack," Chitwood said.

I wonder what he's going to do when he tastes the prison food?