Man shoplifts a lot of shrimp 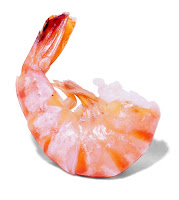 A Massachusetts man shoplifted over five hundred dollars worth of shrimp in four different shopping trips.

John Silvera, 46, pleaded guilty to charges of shoplifting and simple assault in connection with his arrest last month. Police said he stole about $500 worth of shrimp in four separate trips to the Salem Market Basket.

The Eagle-Tribune reported his plea deal required him to waive extradition so he can answer to another shoplifting charge from Methuen, where he is accused of making off with a jacket full of frozen shrimp at a Market Basket there.

Extradition for shrimp theft. Giggle. I wonder if he just had a lot of cocktail sauce.