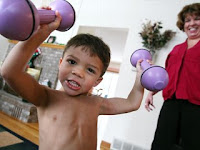 A Michigan boy has a medical condition that gives him super strength.

At 5 months old, Liam Hoekstra of Grand Rapids, Mich., started doing an expert gymnast move called the iron cross. By 8 months old, Liam could do a pull-up and by 9 months, he could climb up and down stairs.

"I would hold him up by his hands and he would lift himself into an iron cross. That's when we were like, 'whoa, this is weird,'" Liam's mother, Dana Hoekstra told The Associated Press.

Soon, the family thought to take him to specialists, who diagnosed Liam with a rare condition loosely called myostatin-related muscle hypertrophy, according to reporting by the AP.

The condition is so rare, only a few similar cases have been documented in medical literature. Hoekstra declined to do more interviews with ABCNews.com, saying she hoped to get her son out of the limelight for a while.

Wow, it's like a real life comic book except without the nuclear radiation causing the issue. I wonder what costume he'll choose.