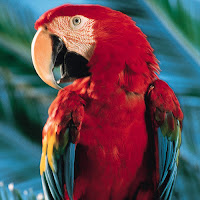 A judge in Florida has ruled that a parrot must appear in court so it's owner can be determined.

On one side of the legal battle is 52-year-old Angela Colicheski, who insists she purchased the parrot 13 years ago. She alleges her parrot flew away 3 years ago, only to reappear in the possession of 47-year-old Sarita Lytell.

Lytell alleges she found her parrot, also an African Grey, around the same time of the disappearance of Colicheski's bird, but refuses to hand over her beloved pet.

Colicheski's attorney, Spencer Siegel, told the Sun-Sentinel his client hopes to win her lawsuit by having Lytell bring her parrot into court.

"The bird wears an identification ring on his claw," Siegel said. "And we feel that it's necessary (to prove ownership) if the numbers on the ring become essential."

Couldn't the possessor of the parrot just give it a new ring? Or perhaps the parrot will fly to the rightful owner.