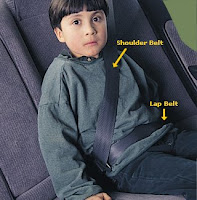 A six year old is being sent to traffic school because he refused to wear his seatbelt.

Daniel resists wearing a seat belt in her van.

"He took off his buckle twice. I pulled over one time and put it on him, then he took it off again right when he passed by the cop," Peet said.

A Los Lunas police officer gave Peet a ticket because of Daniel's offense.She said she went to the Valencia County courthouse and pleaded not guilty."

He agreed with me because I was wearing my buckle," Peet said. "It was my son who wasn't wearing the buckle.

"The judge waived the ticket but demanded to see Daniel in the courtroom."

The judge talked to him and told him if he would keep doing this he would have to come back to the judge and the judge would see what he could do from there," Peet said.Daniel will also have to go to a special class with the state school of driving.

I wonder how much the special driving school is going to cost taxpayers. I think that perhaps the mother should attend parenting classes also so she can learn how to make her child do something. How is she going to make him go to school when he's a teen and wants to quit or make him be home by curfew if she can't even make him wear a seat belt without a judge telling him that he has to.

I've never been a fan of discipline through the judicial system instead of through the parents disciplining through appropriate consequences at home. Hopefully this is the last our judicial system sees of Daniel but if his mother doesn't learn how to control him at the age of six I suspect it will only get worse as he gets older and is able to get into deeper trouble.
Posted by Sara at 11:34 PM