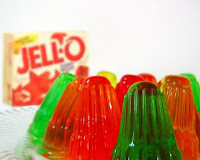 A Florida city has banned Jello Wrestling. They've also banned other forms of naked dancing and wrestling. The best part is how specific the city council was about their definitions of nudity. For example, in case you wonder what they mean by naked buttocks they'll tell you:

"For purposes of this section, the term 'buttocks' shall mean the area at the rear of the body which lies between two imaginary lines running parallel to the ground when a person is standing, the first or top such line drawn at the top of the nates (i.e. the prominence of the muscles running from the back of the hip to the back of the leg) and the second or bottom line drawn at the at the lowest visible of this cleavage or the lowest point of the curvature of the fleshy protuberance, whichever is lower, and between two imaginary lines on each side of the body, which lines are perpendicular to the ground and to the horizontal lines described above, and ..."

Good to know, in case anyone was confused.
Posted by Sara at 11:17 PM