Woman calls 911 because her fried rice didn't have enough shrimp 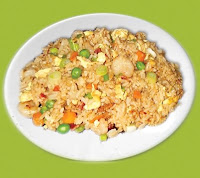 A Texas woman called 911 because she was upset that her fried rice didn't have enough shrimp.

Restaurant' employees said the woman originally left with her order, but came back claiming she did not get her full $1.62 worth of extra shrimp. Since she had already left the building with her food, they refused to give her a refund.

"She started yelling and screaming, brought her boyfriend in and they started making a scene in here," said Alex Kim, the restaurant's attorney.

Employees said that's when the irate woman called 911 to try to get help from the police.

"I always get the shrimp fried rice, so I said I'm going to get extra meat this time. But he didn’t even put extra shrimp in there," she told the 911 operator.

Police say that the woman will not be punished for the phone call because it wasn't obscene or abusive.

I suspect that the ridicule that she will receive from the incident being publicized will be punishment in itself. I wonder if she'll go back to the restaurant.

Sara -- interesting. this shows me I need to be more creative with my complaints -- tee hee!
I got the info on that administrative job if you are still interested. It isn't posted yet but the owner may soon be interviewing a temp she worked with recently. let me know!