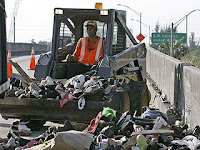 Thousands of pairs of shoes with their laces tied together blocked traffic today in Miami.

State troopers are looking for a charity to take thousands of shoes that were dumped on a Miami expressway, tying up rush hour traffic. Lt. Pat Santangelo says the Florida Highway Patrol received a call about the shoes Friday morning.

Santangelo says he's not sure where the shoes came from. There were no signs of a crash and no one stopped to claim them. He says he hopes someone will take them because he doesn't want to send them to the dump.

I think it was space aliens.

They used highway equipment to sweep the shoes to the shoulder but it was expected that traffic was delayed for hours because of the shoes.
Posted by Sara at 8:52 PM