Dogs save man from crazy elk 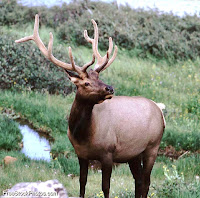 A man in Sweden escaped with only minor injuries after a pack of dogs chased a crazy elk away from him.

The four-legged beast suddenly attacked the man as he attempted to drive the animal out of his yard.

“He was in an orchard when the elk attacked. He ended up with a wound on his head and was taken to hospital,” said Norrbotten police spokesperson Rolf Hamstig to the Aftonbladet newspaper.

The man’s injuries may have been worse had a pack of Norwegian Elkhounds not escaped from their nearby pen and chased the angry elk into the nearby forest.

Officials are deciding whether the elk needs to be found and destroyed as elks usually are not aggressive animals.