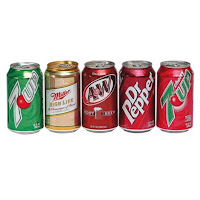 A man in California caught stealing a soda was given a choice. Pay for the soda or leave.

Police responding to the report of a theft recently say the 27-year-old man appeared drunk. An employee told officers the man had taken a cup from the counter, filled it and began drinking.

The man who had $70 in his pocket refused to do either so the policeman cuffed him and hauled him off to prison.

HAHA! Good one. Thanks for joining my blogging family and you now have a new fan.