Caution: driving plow on ice can lead to job loss 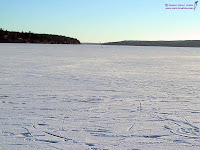 A man in Minnesota has been fired after driving his loader onto a frozen river.

Mike Raymond was clearing snow from county parking lots early Monday when he decided to also clear off a boat ramp on the frozen Red Lake River in Crookston.

Raymond says he wanted to make it easier for people who pull fish houses on trailers onto the river. He so happens to have a fish house on the river himself — but told the Grand Forks Herald that's not why he wanted to clear the area.

The John Deere 544 loader slid down the cement ramp, through the ice to the river bottom.

Raymond was quickly rescued but it took much longer to retrieve the vehicle.

Poor guy, who would have thought that driving an extremly heavy loader onto ice would be a bad idea.