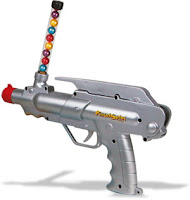 A man in Washington state told police that he was shooting off his paintball gun to prevent his friend from driving drunk.

Lattin said investigators arrived at the apartment complex to find Shawn Wallace, 41, firing paintballs at the windshield of a friend's car. He said Wallace, who was arrested on suspicion of unlawfully discharging a weapon and an unrelated misdemeanor warrant, told officers he was covering the windshield in paintballs to prevent its owner from driving under the influence of alcohol.

Police said that using a paintball gun to prevent drunk driving is inventive but not legal.

I wonder if that was the real reason or if the man just cooked up a good story after the police showed up.
Posted by Sara at 8:28 PM

Oh my gosh, I so wanted a Paint gun for Christmas but probably would do something stupid like that idiot and be in the same boat. Just better not have guns in my house!