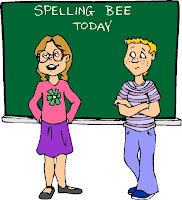 A middle school student in North Carolina returned from his spelling bee to find a sign congratulating him, and immediately noticed it was misspelled.

Joe Smith said when his son, Michael, returned to Carmel Middle School Wednesday after his involvement in a spelling contest, he quickly noticed a pair of misspelled words on the school sign congratulating his efforts, The Charlotte (N.C.) Observer said.

Smith said the sign not only misspelled congratulations, but even offered an incorrect spelling of his son's first name. The misspelling of Michael was not reported and the congratulations error was tentatively blamed on scrunched signboard letters.