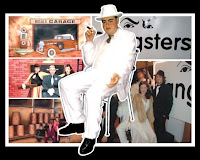 A family in the UK is offering a reward for the return of their Al Capone yard statue.

Pauline McCook said the statue of the notorious gangster at her Isle of Sheppy, England, home was like "part of the family" and would be covered in decorations annually for Christmas, the BBC reported Monday.

A police representative said the statue, which is believed to have been taken between Dec. 1 and Dec. 10, was "an extremely unusual item to steal." Police said the "extremely heavy" fiberglass statue would have required more than one person to move and the thieves would have required a vehicle for transport.

My first question is how exactly do they decorate Al Capone for Christmas? My second is why would you steal Al Capone? Stealing a mobster doesn't seem like a smart idea. Hopefully it will show up someplace strange like the local high school because it sounds like the McCook family misses it.