Man gets prison for chicken attack 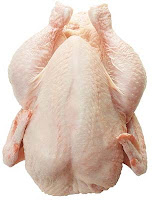 A Michigan man will get three to six years in prison after attacking his mother with a fork and then attacking a woman with ten pounds of frozen chicken.

Prosecutors say McKaney stabbed his mother with a fork at her house and later exchanged words with another woman as he rode a stolen bicycle. They say McKaney hit her in the head with a plastic bag of frozen chicken, opening a wound that required five surgical staples to close.

No word as to why he chose to attack her with chicken rather than a rump roast or celery.
Posted by Sara at 5:40 PM