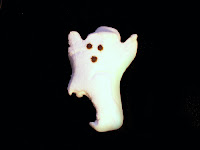 A burglar in Malaysia says that he was held hostage in the house he was trying to rob for three days without food or water.

The man told police that every time he tried to escape, a "supernatural figure" shoved him to the ground.

The owners of the house called the police when they returned from vacation and found him dehydrated.

What a good ghost. I wish I had a ghost that would protect my house from robbers. Sounds much more effective than an alarm system.
Posted by Sara at 6:56 PM