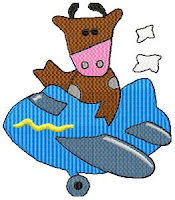 A vintage plane pilot hit a cow while making an emergency landing in a bi-plane.

"I had to put the aircraft down straight away and spotted a likely field where I could see there were cows. They were all on my right hand side except one on my left. I narrowly missed a fence and touched down and then the silly cow ran across to join her mates on the other side of the field," Wotton was quoted as saying in the Telegraph newspaper.

"I clipped her and she went rolling away but seemed unhurt and carried on grazing. The aircraft was very slightly damaged."

The man says that he might paint a cow on the side of his plane to commemorate the cow landing.

He had a camera on board and posted the video on youtube.

Poor cow. Being hit by a cow has got to be traumatic.
Posted by Sara at 9:37 PM