Bishop arrested for helping a child read on the chimney 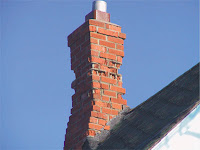 A bishop in London was arrested after helping his sons onto the chimney to read a book as part of a contest.

Bishop Jonathan Blake, of the Open Episcopal Church, took pictures of his sons Nathan, eight, and Dominic, seven, while they sat on top of their two-storey home.

The children were calmly holding a book called "The Killer Underpants" for a school competition to find the most unusual place where a pupil had read a book.

After a neighbor alerted the police, the clergyman said he was arrested, driven away in a cage in the back of a van and kept overnight in a cell.

"I was taken out in handcuffs in front of the whole neighborhood while my children were in tears," the 52-year-old told Reuters on Thursday. "I was kept in the cells without any information about what was taking place from 7 p.m. until 10 a.m. the following morning.

"I am appalled and incredulous. I would never have imagined in a thousand years that this could have happened." The children were wearing safety harnesses and got on to the chimney via a flat roof at the back of the house in Welling, southeast London, he added.

Sounds like the police went a little crazy. I hope that the kids win the contest.