The race that makes you gain weight 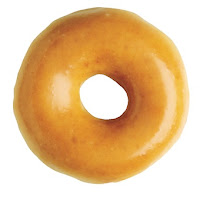 Racers in North Carolina raced two miles to a doughnut shop where they then ate two dozen glazed doughnuts and then raced back to the start.

That's 2,400 calories and 144 grams of fat consumed while burning about 400 calories during the run.

The student-run Krispy Kreme Challenge raised about $35,000 for the North Carolina Children's Hospital.

The event began on a dare among college friends in 2004. Then-freshman Ben Gaddy won the first race by beating nine guys in about a half-hour.

That sounds terrible. I bet it's a hit with the frat boy crowd.