Indian company to produce new drink made with cow urine 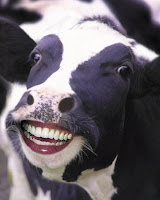 An Indian company is working on a new formula for a drink that features cow urine.

The Rashtriya Swayamsevak Sangh (RSS), or National Volunteer Corps, said the bovine beverage is undergoing laboratory tests for the next 2 to 3 months but did not give a specific date for its commercial release.

The flavor is not yet known, but the RSS said the liquid produced by Hinduism's revered holy cows is being mixed with products such as aloe vera and gooseberry to fight diseases such as diabetes and cancer.

Many Hindus consider cow urine to have medicinal properties and it is often drunk in religious festivals.

The organization, which aims to transform India's secular society and establish the supremacy of a Hindu majority, said it had not decided on a name or a price for the drink.

"Cow urine offers a cure for around 70 to 80 incurable diseases like diabetes. All are curable by cow urine," Om Prakash, the head of the RSS Cow Protection Department, told Reuters by phone.

I don't think I'll be trying that one.