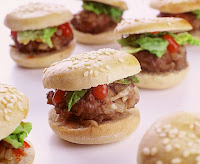 A UK buisness man made his employees eat two day old McDonalds burgers after one of them complained about swanky hotel food.

Damon Buffini, 46, the millionaire head of private equity firm Permira, allegedly purchased more than 100 burgers from a London McDonald's and presented the food to employees 48 hours later, the Daily Mail reported Friday.
The Daily Telegraph said the incident took place at the Pennyhill Park hotel. The newspaper said Buffini instructed hotel staff to serve the burgers for dinner during a weeklong company retreat after a partner complained about the hotel's food.
Buffini told the partners during their burger dinner that the meal was meant to remind them of "how lucky they are."

I wonder if they learned their lesson. Somehow I highly doubt it.
Posted by Sara at 7:13 PM