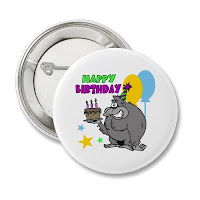 A lawyer is upset that a gorilla that went on a rampage injuring two zoo patrons is getting a birthday party.

The zoo celebrated the 16th birthday of Little Joe, a gorilla that injured two people when it escaped in 2003, Monday as part of its "Go Ape Week" festivities, WCVB-TV in Boston reported Tuesday.

Donald Gibson, who represented one of the gorilla's victims during a 2007 civil case against the zoo, accused officials of using the primate's infamy from the attacks as an advertising ploy.

"It's very frustrating to see this particular gorilla -- Little Joe -- used as a marketing tool given what happened," Gibson said.

However, zoo officials said celebrating the birthday of Little Joe, whose finger paint creations were displayed at the zoo during summer 2007, had nothing to do with the 2003 incident.

Happy Birthday to Joe. Gibson, you are mean, every Gorilla deserves a birthday.

Sara, you are too funny! Your comments are even funnier than the stories. Where do you get this stuff?!?