Who needs a gun when you have a pizza 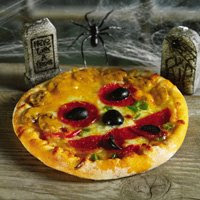 A pizza delivery guy in Florida escaped from an armed robbery throwing a pizza at the robber.

Devictoria told police he lobbed the pizza at the gunman and heard at least one shot as he fled from the home.

No word on what kind of pizza he threw at the robbers or if the police are recommending that citizens carry pizzas as defensive weapons in the future.

Two teenage boys were arrested later for the armed robber.