Comcast charges man for cable box that started a fire 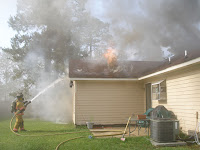 A man in Florida is upset after receiving a bill from Comcast for his destroyed cable box. The cable box was destroyed after it started a fire.

The fear I felt being wakened by the smell of burning wire, the fear that followed the incident -- and that, to some extent, I still feel -- over the fact that something as innocuous and seemingly harmless as a cable box could set my home ablaze in the middle of the night was apparently of no concern to Comcast.

So, even if the companies defective equipment caused the destruction of said equipment (not to mention the damage to his other property) the company still expects payment for the destroyed equipment.

What an upstanding company.
Posted by Sara at 10:37 AM