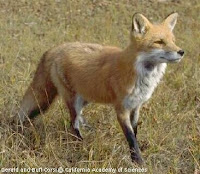 A Minnesota man has been charged with assault after he used a Super Soaker to spray fox urine on a group of teenagers.

The night before, Wagar said, he had been outside on his property near Willmar wearing night vision goggles and spotted a group of 15 to 20 people, the newspaper reported. Wagar, who said he was tired of having his property vandalized by teens scattering toilet paper, grabbed the Super Soaker and fired, the report said.

Then there was a struggle for the gun after he sprayed one of the teenagers.

One father said that Wagar found his son's cell phone and offered to return it for $100, which the man refused. He said that he also took his son to apologize to Wagar only to be screamed at.

It's a struggle that's been played out throughout time. Crotchety Old Man vs. Annoying Kids. I think in this case the Old Man won.
Posted by Sara at 7:07 PM